Home
Features
Does the massive recycling drive suggest a critical threat to the conventional packaging sector?

A phenomenon once considered nearly superfluous, the trend of recycling, as on today, has emerged as one of the most urgently indispensable requirements, given the mammoth amount of waste accumulated across the globe, alongside the likes of plastic, metals, wood, paper and paperboard, and glass. Estimates related to the waste indeed provide a vital testimony to the aforementioned fact – according to the National Environment Agency, in 2017, close to 7.70 million tons of solid waste was generated, while the amount of waste recycled stood at 4.72 million tons.

The NEA cited that waste generated due to construction debris, plastic, and paper/cardboard was pegged at 1,609,300, 815,200, and 1,144,800 tons respectively in 2017, while recycling rate for the waste types stood at 99%, an outrageous 6%, and 50%. A report published on the National Geographic last year claims a vast proportion of plastic waste – over 76%, to remain nonrecycled, naturally finding its way to landfills and the oceans. The study also affirms that if the present trends continue, there will be approximately 12 billion metric tons of plastic accumulated in the landfills, by 2050. Quite overtly, the amount of waste generated and the amount recycled stand miles away from each other, a state of affairs that has led to treacherous disarray in the world’s arable lands and more specifically, the water bodies. 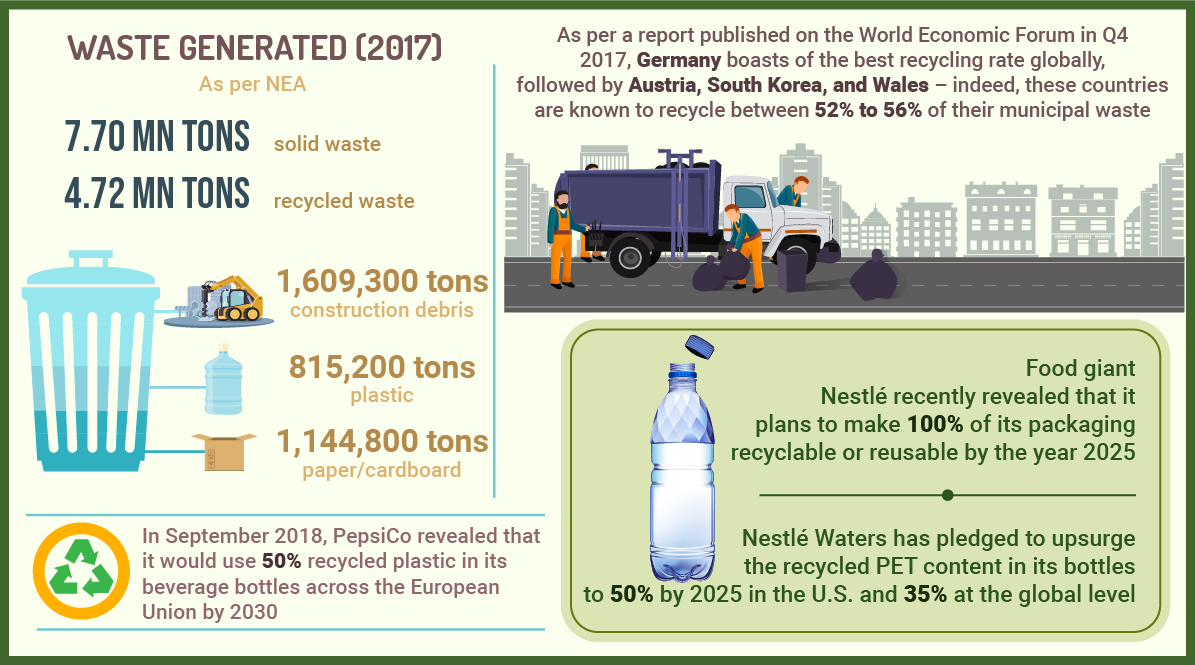 The severity of the issue in hand has been under serious scrutiny in the last couple of years, as is evident from the numerous recycling initiatives that are being adopted to minimize the risks of harmful waste, specifically plastic, on the environment. The annual International Coastal Cleanup affirmed the acuteness of plastic pollution on coastal U.S. in 2017, when over 3.7 million pounds of trash, majorly comprising plastic, had been collected by a humongous 209,643 people on a single day.

While a groundbreaking series of pledges and corresponding actions are still the need of the hour, it is prudent to mention that a section of entrepreneurial groups and administrative bodies is taking quite some interest in making recycling the modern-day sustainability mantra. The efforts undertaken by private sector companies and leading regulatory bodies across the globe are certain to have a transformational impact on the frequency of recycling in the next decade or so, claim experts. Major companies across the F&B, packaging, and industrial sectors are seen taking vital measures to join the recycling bandwagon, a few of which are mentioned below:

The year 2018 was also witness to a number of fast-food chains, supermarkets, and technology giants upping their ante to join the incessant battle against plastic usage and turn to recycling as a viable, environment-friendly option, a trend that has strongly consolidated its power in the beginning of 2019 as well. Some of the initiatives that made it to the headlines with regards to enforcing sustainability and recyclability practices are enlisted below:

The involvement of governmental bodies has led to numerous geographies taking the lead on recycling trends across the globe, given that the disastrous impact of nonrecycling has generated jitters worldwide. As per a report published on the World Economic Forum in Q4 2017, Germany boasts of the best recycling rate globally, followed by Austria, South Korea, and Wales – indeed, these countries are known to recycle between 52% to 56% of their municipal waste.

In the decades to come, the trend of recycling is anticipated to depict an entirely reinstituted portrayal altogether, with numerous segregations and respective protocols established for different types of waste (plastic, metal, paperboard, municipal, etc.), in conjunction with pivotal contributions from private sector enterprises and legislative organizations alike.

Saipriya Iyer presently works as a writer for packingmaterials.org. Having dabbled with the domain of content creation for nearly half a decade, she now boasts of an enviable portfolio, holding quite some years of experience in penning down insightful pieces related to numerous industry verticals. A qualified computer engineering graduate from the University of Pune, Saipriya can often be found leveraging her knowledge of the latest trends in her write-ups.