Home
Features
‘Plastic Ban’ in 2018: An overview of initiatives undertaken by governments and private institutions

Capaciously utilized across a widespread application spectrum, the circumstance of the world surviving without the presence of synthetic organic polymers – plastics in common parlance seems unimaginable today despite the fact that their large-scale manufacturing and usage dates back only to 1950.

As of today, the significance of plastics can be comprehended by two major events witnessed in late 2018. Apparently, the Great Britain’s Royal Statistical Society declared Plastic Fact as its statistic of the year and the Collins Dictionary named ‘single-use’ their word of the year in 2018, demonstrating the humongous plastic-challenge the world faces today. 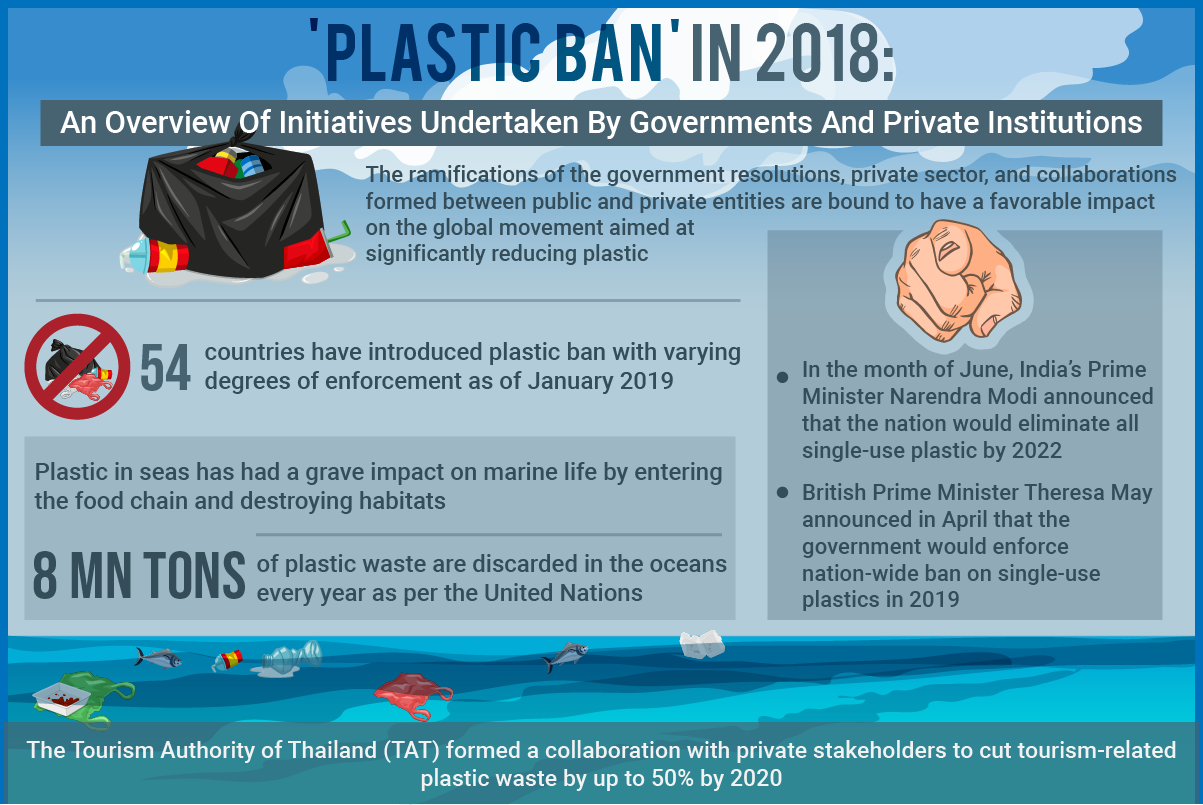 Surpassing the usage of most other man-made materials, the rapid growth in plastics production has been nothing less than extraordinary, however, it poses a serious threat to the global environment. Although numerous countries are deploying innovative solutions to increase the recycling of plastics, the chief route being embraced is of altogether banning the usage of plastics. In this context, the initiatives and contributions made by major governments and private institutions to reduce the plastic waste deserve a mention.

As of January 2019, about 54 countries have introduced plastic ban with varying degrees of enforcement.

As per the statistics by the United Nations, about 8 million tons of plastic waste is discarded in the oceans every year. It is quite well-known that plastic in the seas has had a grave impact on marine life, and, as a matter of fact, has destroyed habitats as well as entered the food chain. Indeed, to tackle the same, in October 2018, the European Parliament gave the green signal for the elimination of plastics polluting water bodies, claims a report. The proposed ban aims to target the top 10 single-use plastic products which litter beaches across Europe.

The private sector, which is regarded as the most prominent manufacturer of plastics, has been showing signs of proactiveness in tackling the plastic-waste challenge by collaborating and investing in research and development activities. Enumerated below are the foremost instances underlining the actions being taken by private sector biggies to reduce plastic pollution:

Apart from the resolves made by regional governments and the private sector in their individual capacities, the significance of public-private partnerships is being brought to the fore in the recent past. For instance, the Tourism Authority of Thailand (TAT) formed a collaboration with local communities in Bangkok, Siam Piwat Retail and Development Company, Thai Hotels Association, Expedia Group, and other private stakeholders to cut tourism-related plastic waste by up to 50% by 2020. Needless to mention, the ramifications of the government resolutions, private sector, and collaborations being formed between public and private entities are bound to have a favorable impact on the global movement aimed at significantly reducing plastic in the coming times.